It’s no secret that 2014 has been a bit of a banner year for infectious disease. And, not to scare anybody, but a LOT of us are about to all gather in a location with 150,000 other people from around the world, all at the same time. I don’t know about you, but that gives me just a liiiiittle pause.

But there is a solution! And it is a good one. Recently, the Harvard Medical School published its findings on the nature of hand-to-hand communications, and the likelihood of transmission of diseases in its different forms. The short version: fist bumps are a safer and cleaner alternative to handshakes.

That’s right, you read correctly. Harvard has officially stated that we should all be fist bumping.

Absurd as it sounds, there is a very strong logic to it. When we shake hands, anything that is in our palms or on our fingers is instantly transferred to the receiving hand, and vice versa. The slight amount of moisture we always have on our hands practically ensures that the transfer occurs, too. There’s no “10-second rule” either; those bugs move instantly as they are practically shoved into waiting hands.

With the fist bump, however, the likelihood of transfer is much lower, because the contact is not so wide-spread, there is less moisture and pressure being applied, and because of the drastically-reduced amount of microorganisms on the outside of our fingers.

So I propose this, fellow Dreamforce attendees: the (un)official greeting of Dreamforce 2014 should be the Fist Bump.

Now I know what you’re thinking. “But Mark, that’s so unprofessional!” Ah, my friends, “professional” is what you make it. “Professional” is basically another way of saying “extremely polite”, and what could be more polite than not passing on the DreamPox?

No no, hear me out! We can make the Fist Bump professional, right? Let’s set some guidelines, ok? Nothing says “professional” like rules and guidelines, am I right?

The Professional Bump is straight-trajectory, no-frills, and quick contact. 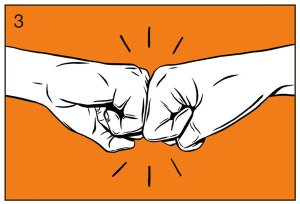 However, do not “explode” afterwards. This is tacky, and is therefore right out.

Unless you’re doing it with a bald eagle.

Maintain low velocity when jewelry is present. It is not professional to cause contusions.

The “guided strike” is inadvisable, as it defeats the purpose and further invades personal space.

Bumping in gloves is acceptable, so as to not facilitate the awkward pause of waiting for removal of said glove.

Welp, here you have it, folks. If that doesn’t convince everyone to be slow-punchin’ at DF14, I don’t know what will. Just don’t be offended if I keep a bottle of Purell handy, ok? Love you. 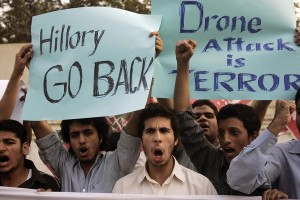 No really. Calm down. Deep breaths. Hear me out. I’m not a fan of this move either (I’m a centrist who is largely apolitical at times, and this kind of divisive move rankles against my more peace-seeking sensibilities), but I think I know why they did it.

Clearly the choice of Hillagore is a politically charged one. But before you go off the rails with cries of “WELL I’M NOT GOING TO DREAMFORCE NOW”… ok, before you go off any more of those rails… just… hear me out. Benioff is not so short-sighted; he had to know this was going to ruffle feathers, and a lot of them. Let’s face it, the Business Airspace has no small amount of planes that fly at Right angles most of the time. And our political landscape right now is metaphorically akin to something resembling the offspring of a house of mirrors, an electric fence of Jurassic Park-strength wattage, and a spotter tower filled with over-caffeinated snipers strung out on PCP. You don’t even have to take a wrong step and you’ll have bullets whizzing around your ears.

These are known quantities. Marc Benioff is well-known for being a left-leaning bleeding-heart liberal idealist, but he is most definitely not stupid. Therefore, it stands to reason that he made this decision despite knowing the reaction it would have, believing the gains would outweigh the possible backlash.

Where could the answer lie then? At the end of May, Salesforce received Authority to Operate by the FedRAMP, effectively opening its Government Cloud for business. Inviting two prominent Democratic Party representatives to speak is just good business for Salesforce, because it gets their foot in the door for the Government Cloud.

Think about it. Salesforce is, at the very least, a database of businesses and/or people, with the ability to expand far beyond that, into things such as ERP and project tracking. It’s a collection of DATA. What government agencies are going to want to collect data? Well, you’ve got intelligence agencies, but they’d never let another company track their data. Probably the same story for the IRS. But then there’s Social Security, Housing and Urban Development… social programs and infrastructure. And historically, which party puts more money into social programs and infrastructure? Hillagore’s Party.

I’m not talking about whether or not anyone should put money into those programs. I’m simply saying that Salesforce and Marc Benioff know who their demographic is for the Goverment Cloud, and they’re marketing to that. Hillary is already pretty much THE shoe-in for the Dems in this upcoming election. If she wins, and had a marvelous experience at DF14, it’s a huge feather in Salesforce’s cap, business-wise. There will be a lot of money to be made. This is a business decision.

Sure, they could have invited Paul Ryan or someone like that to get the opposing viewpoint, but there’s a few reasons why they won’t. One, I think Benioff would have a hard time playing mediator; he’s not unbiased and he’s wise enough to know that. Two, it wouldn’t accomplish their business goal, and might actually take away from a positive Hillary experience.

Yes, there will almost assuredly be protestors at the conference, but please don’t count yourself among them. You’ve got better things to do at Dreamforce than waste your time accomplishing nothing except rubbing elbows with other people who think the same way you do. For the record, I’d be saying the same thing to the other side, were the tables turned.

Salesforce is an inclusive platform; it’s remarkably democratic (and I mean that in the general definition of the word, not referring to the party) in that it gives a lot of power to individuals in how they set up their business software. It enables ANYONE with sufficient intelligence to maintain their business. There are no politics on an Account page, no party lines drawn in how you configure your workflow. Salesforce, and therefore Dreamforce, is about working TOGETHER, not about being divided. So don’t let yourself fall into the Us vs. Them trap, because there’s no room for it at my table, and there’s no room for it at Dreamforce.

The preceding is a screenshot captured from the newly-released Agenda Builder for Dreamforce 2013. But to my knowledge there are no products announced by Salesforce currently called the “Device Cloud”. Given the large amount of sessions at Dreamforce alluding to the “Internet of Things”, this makes a lot of sense! Seems like we’ll get an announcement on this…

UPDATE (10/10/2013 20:07PM CST): A tweet from Adam Seligman, VP of Dev Relations for Heroku and Salesforce, says that no, this is just a typo. One way or another, it’s sure to be a very interesting session!